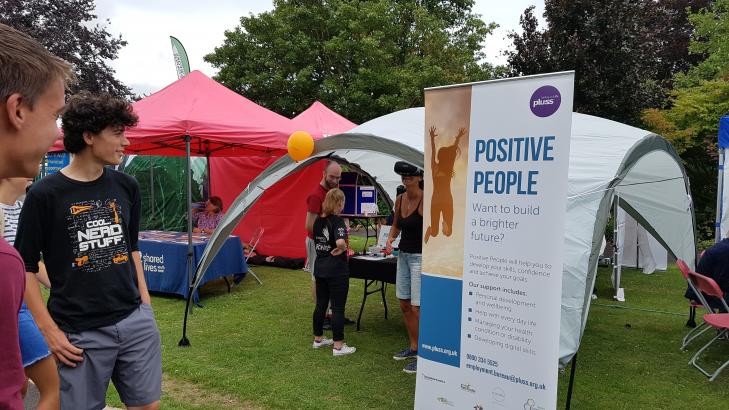 David had spent years working as a decorator, but an injury in his arm meant that he needed to look for a new career path. This was a daunting prospect, but David came across our Positive People project in Somerset and decided to sign up. When he first joined Positive People, David lacked confidence and drive; he was struggling with a big physical change in how he could work. One of his main focuses was on his physical health, so Positive People provided him with a local gym membership. This gave him the opportunity to build up strength in his arm and improve his physical and mental wellbeing.

His other focus was on improving his digital skills. David began working with Cosmic’s Digital Trainers, Clive and Chloe, to help build his confidence and teach him new digital skills. His main experience with Digital was on his mobile phone and tablet, and he was keen to learn more about computers. In his training sessions, he used both his tablet and computer alongside one another, allowing him to utilise the knowledge he already had. This has allowed him to develop a range of transferable digital skills.

David progressed steadily and he is now literate in the basic skills needed for personal internet use, this includes sending emails, finding information online, updating his Universal Credit account and accessing online training. Through their sessions, Cosmic were also able to introduce David to the public computers at his local library, allowing him to use a computer more regularly.
David struggled with his literacy, the Positive People Project were able to help him attend Functional Skills Literacy classes with Somerset Skills and Learning. His growing confidence in reading and writing helped him hugely in building confidence and retaining his digital skills. In their digital sessions together, Chloe began to notice that David would write more and needed less support from her on writing tasks.

Throughout his journey, David has been exploring the different employment opportunities he could take, to replace his work as a decorator. Although David isn’t ready to work yet, he has a focus on what may be on its way in the future.

“I’ve found Positive People really satisfying, because they don’t judge you, they just let you get on with it. I wanted to get my confidence back really, and it has come back. I’d definitely recommend it, one hundred percent.”

With an online training course under his belt and another along the way, David is leaving Positive People with the right tools to keep him moving forward. We really do wish him all the best.