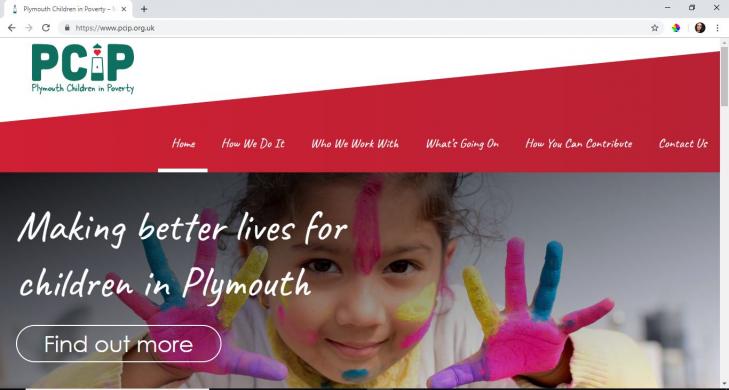 Plymouth Children in Poverty (PCiP) is a new charitable organisation that has been set up as a response to a sad and troubling situation. PCiP’s mission is to eradicate poverty in the city. Many people may not be aware of there being an issue, but the troubling reality is that there are currently 11,000 children living in poverty in Plymouth. “PCiP was born out of a want and need for collaboration and encouragement of our private sector to work more closely with the public sector and charitable organisations – sharing responsibility to rid child poverty from our city.”

Stephen Patey, one of the founding members of PCiP, came to Cosmic to ask for some support to get plans off the ground with a new website. Critical to the success of their mission is the ability to reach a new audience and to convey messages and calls-to-action clearly. Therefore, Cosmic recognised the importance of a strong and effective website for this fledgling organisation. Cosmic were able to support PCiP in these circumstances by providing a low-cost solution that enabled the not-for-profit to spend minimal funds in return for a bright, clean and modern website.

The resulting website now allows PCiP to clearly communicate the key messages: the problems that need to be solved, the potential solutions, and the ways in which individuals and organisations can get involved to help. Sadly, the acuteness and severity of the problem means that there are no short-term fixes. The Plymouth Fairness Commission Report highlights some startling statistics: If a child is born into one of the city’s most deprived areas they have a 60% chance of growing up in poverty; only a 35% chance of achieving more than 5 GCSEs; and a life expectancy of 72 years: less than that of Vietnam or Lebanon.

Armed with their new website, the aim of PCiP is to link to the key areas highlighted by Plymouth City Council’s action plan to tackle Child Poverty. As such, during 2019 there are five targeted work streams:

3. Support projects that encourage better dental health in children. In 2017, over 3,600 teeth were removed from children under 16 under general anaesthetic in Plymouth.

4. Helping families to help themselves and deliver healthy meals to their children.

5. Helping children to develop their reading skills so that they are not left behind.

As well as these targeted work streams, PCiP recognises that there is already a huge amount of work being undertaken in the City in a multitude of ways and they aim to promote this and offer a link between those already doing something to those who want to get involved.