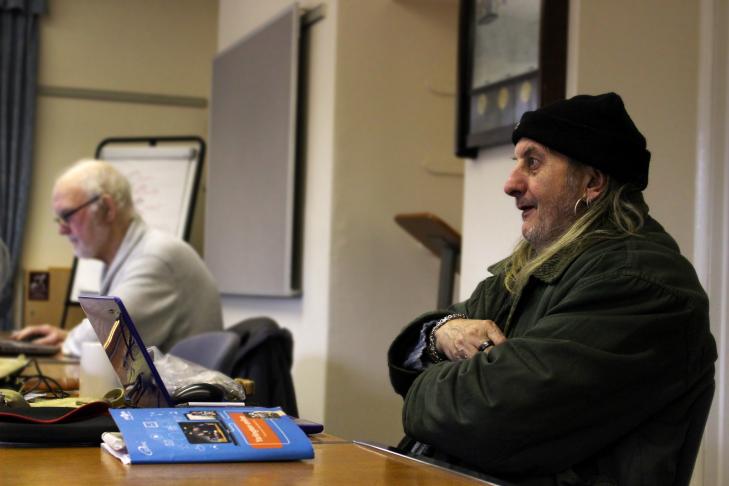 Steve has been attending Yarlington Housing Group’s digital skills workshops for two and a half years now. His story began with his career as a roofer, but Steve is also a qualified welder. This is a skill that he seems to use frequently, as he spends most of his time creating things.

Sadly, Steve had to quit his job as a roofer after being diagnosed with Ménière’s disease. This causes vertigo and tinnitus, both dangerous to suffer from when working at heights. He has struggled to find work after this, and is still unemployed now, with nobody wanting to employ him due to his medical condition. On one of his visits to the Job Centre they recommended the digital skills workshops that Cosmic offer in partnership with Yarlington Housing Group. Cosmic have placed two full time members of our training team into Yarlington, offering a unique resource to their 20,000 residents. After trying out the first session over two years ago, Steve has attended them weekly ever since.

He is incredibly imaginative, constantly making fascinating pieces of art and craft from discarded objects and waste materials he finds around him. He upcycles these commonplace objects and unwanted items, breathing new life into them. When asked how he comes up with these unusual ideas, he responded, “I’m always looking around at everyday items and thinking... What can I turn that into? My mind works in funny ways.”

With zero IT skills, through the digital skills workshops he’s learnt how to use a computer, and now has his own laptop. He set up Social Media profiles, and now uses Facebook to talk to family and friends.
Through our workshops Steve was told about the charity Men’s Sheds; their main focus is helping older men who struggle with loneliness and isolation. They build their ‘Sheds’ where people can craft and create whatever they want, but rather than being alone in a workshop in their garden, they are instead surrounded by like-minded people they can speak to.

Steve is now a part of this charity and regularly attends their meetings. As someone who is passionate about creativity, it’s a perfect way for him to develop his skills and meet new people. Over the years he’s crafted a number of incredible things. His many creations include one-of-a-kind walking sticks, carved wooden sculptures and even keyrings made from discarded spoons.

Before joining the digital skills workshops, Steve knew nothing about computers. Now he wants to start using his digital knowledge to sell his creations online. He’s looking into Facebook Marketplace, Amazon and Wish as potential places to start selling his pieces. We’re sure he’ll be very successful in his endeavours, especially with the support of Cosmic’s continued digital training and the friends he has made.